Carrie Underwood "The Storyteller Tour: Stories in the Round"

with special guests Easton Corbin and The Swon Brothers 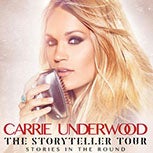 Seven-time Grammy winner and Pollstar’s three-time top female country touring artist, Carrie Underwood, who just released her fifth studio album, Storyteller, will launch a new arena tour in 2016 to take her new music on the road. The Storyteller Tour - Stories in the Round, in association with award-winning cosmetics brand ALMAY, will kick off on January 30 in Jacksonville, Florida, playing 40 arenas across the U.S. and Canada.