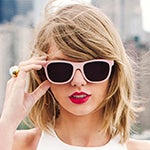 Seven-time GRAMMY winner Taylor Swift announced The 1989 World Tour on Good Morning America this morning just days after performing an epic concert in Times Square to over 20,000 fans, wrapping up promotion of her history making fifth studio album, 1989. The 1989 World Tour; produced and promoted by AEG Live & The Messina Group (TMG), kicks off on May 20, 2015 in Louisiana and makes a stop at the KFC Yum! Center in Louisville on June 2.