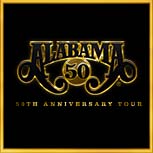 Tickets and information are available at kfcyumcenter.com or by visiting www.thealabamaband.com. The most-celebrated group in country music history will be joined for their Louisville show by fellow Country Music Hall of Fame member RONNIE MILSAP. Combined, these two legendary acts bring over 80 No. 1 country hits to the KFC Yum! Center stage.

In 1969, a trio of young musical cousins from Fort Payne, Alabama, journeyed to Myrtle Beach, South Carolina to play their music at a bar called The Bowery. It took band members Jeff Cook, Teddy Gentry and Randy Owen eight years of word-of-mouth and tip jars to earn the major label deal of which they’d been dreaming. ALABAMA would go on to change the face of country music. Winning GRAMMY®, CMA, ACM and more than 300 industry awards, the Country Music Hall of Fame, Musicians Hall of Fame, and Nashville Songwriters Hall of Fame band is the most celebrated group in country music history. This fall, their “50th Anniversary Tour” rolls on, bringing decades of hit music to Louisville.

It's been 50 years since Jeff Cook, Teddy Gentry and Randy Owen left the cotton farms of Fort Payne, Alabama to spend the summer playing music in a Myrtle Beach, South Carolina bar called The Bowery. It's a classic American tale of rags to riches. From humble beginnings picking cotton in the fields to international stars, ALABAMA went on to sell 80 million albums and change the face and sound of country music. Quality songs that have become the soundtrack for American life are the foundation for ALABAMA's stellar career. The group introduced rock style guitars, lights, pyrotechnics and sounds to the country audience that has inspired many of today's brightest country stars including Kenny Chesney, Jason Aldean and Luke Bryan. While their music continues to stand the test of time, their numbers and stats are beyond compare. Five decades since starting the band, ALABAMA has charted 43 #1 singles, including 21 #1 singles in a row, and have won dozens of CMA, GRAMMY®, and ACM Awards. They are members of the Country Music Hall of Fame, the Musicians Hall of Fame and have their own star on the Hollywood Walk of Fame. In addition, they are world-class philanthropists who have raised millions of dollars for various charities. For more information on ALABAMA, visit thealabamaband.com.

There is no doubt Ronnie Milsap is a country music legend. He’s a six-time Grammy Award winner and 12-time ACM and CMA Award winner (including the CMA’s Entertainer of the Year award and the ACM’s Pioneer Award). He has influenced countless musicians over the years, paving the way for his own genre-bending style of music. With over 35-million albums sold and 40 #1 hits, Ronnie Milsap is one of music’s most-successful artists. In 2014, he was chosen for membership in the Country Music Hall of Fame. For more information on Ronnie Milsap, visit ronniemilsap.com.

Outback Presents is the leading independent, full-service promoter of live entertainment. From their home base in Nashville, TN, Outback Presents specializes in producing music and comedy shows, tours and festivals across North America and connecting their diverse roster of artists with their fans. For more information on Outback Presents, visit outbackpresents.com.