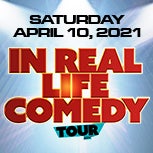 Mike Epps is returning to the KFC Yum! Center with the In Real Life Comedy Tour on Saturday, April 10, 2021. This show will include performances with Mike Epps, Michael Blackson, DC Young Fly, Karlous Miller, and Kountry Wayne.

Due to overwhelming demand, a second show has been added to the In Real Life Comedy Tour with Mike Epps at the KFC Yum! Center. The additional performance is scheduled for 10 p.m.