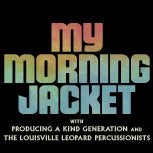 My Morning Jacket are set to make their eagerly awaited hometown live return with a show in downtown Louisville on Saturday, October 29, 2022 at the KFC Yum! Center. The show is being produced by Live Nation and Production Simple and will be the band’s first hometown live date in six years. Billed as the Halloween Costume Ball and Celebration, it will also feature special guests Producing A Kind Generation and The Louisville Leopard Percussionists. Fans are encouraged to come to the show dressed in their favorite costume* to dance the night away! A portion of the proceeds will benefit Change Today Change Tomorrow.

The Louisville show sees My Morning Jacket continuing to celebrate last year’s acclaimed new album, MY MORNING JACKET. Produced and engineered by Jim James over two multi-week sessions at Los Angeles, CA’s 64 Sound, MY MORNING JACKET is the band’s 9th studio album and reaffirms the rarefied magic that’s made My Morning Jacket so beloved, embedding every groove with moments of discovery, revelation, and ecstatic catharsis. The album made an explosive chart debut upon its October release, arriving at #1 on Billboard’s “Top Vinyl” along with #3 on both “Top Rock Albums” and “Independent Albums.”

*Masks are not allowed as part of the costumes.

*No fake weapon props will be allowed with costumes.

COVID-19 Protocols
At this time, the event organizer for My Morning Jacket is not requiring proof of vaccination or a negative COVID-19 test for fans attending the show.