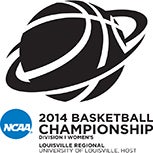 This will be the first time Louisville has hosted an NCAA Women's Basketball Regional. U of L has hosted the first- and second-rounds in 2013 at the KFC Yum! Center and in 2010 at Freedom Hall.

Louisville is one of four regional sites in 2014 which will each feature four teams competing for a spot in the 2014 Final Four held in Nashville, Tenn.