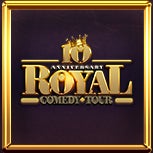 The undisputed Queen of Comedy, Sommore, is set to rule the stage as she hosts the Royal Comedy Tour at KFC Yum! Center in Louisville on June 4 at 6:30 p.m. Sommore will lead the evening with some of comedy’s most talented and sought-after entertainers, including Lavell Crawford, Earthquake, Arnez J, and Tony Rock. Tickets for reduced capacity seating go on sale on March 19 at 10 a.m. at the KFC Yum! Center Box Office and Ticketmaster.com. The all-star lineup will be sure to deliver side-busting, non-stop laughter for a memorable night of comedy!

In her more than 20-year career, award-winning comedienne of “Chandelier Status,” Sommore, has become a trailblazer for women in the comedy business as one of the most successful comedians in the U.S. and abroad. Sommore has been featured in a number of hit films including "Soul Plane," "Something New" and "Friday After Next." Her all-new self-produced comedy special, "A Queen With No Spades" recently premiered on Showtime.

Comedian, actor and voice-artist, Earthquake entered America’s households on the classic run of BET’s "Comic View" and HBO’s "Def Comedy Jam," and the special series, "One Night Stand." Appearances include "The Howard Stern Show," “Real Time with Bill Maher,” "The View," "The Real," and "Late Night with Conan O’Brien."

Comedian, Actor, Producer Tony Rock is the hardest working man in show business. Rock has proven to be one of television's best hosts having played the role of ringleader on HBO’s weekly stand-up comedy series "All Def Comedy," NBA TV's "The Warm Up," along with BET’s "Black Card Revoked" and "Apollo Live," all while co-starring in his first primetime network series, CBS' "Living Biblically."