Songs in the Key of Life Performance Tour 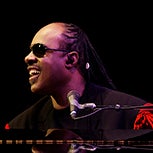 Legendary singer, songwriter, musician and producer Stevie Wonder announced today an extended run of dates for his SONGS IN THE KEY OF LIFE PERFORMANCE tour due to popular demand. Wonder will bring the critically-acclaimed performance, which is a live adaptation of the iconic Songs in the Key of Life album, to more than 10 U.S. cities beginning March 17 in Denver, CO. Produced by Wonder Productions and Live Nation and promoted by Live Nation, the tour will include a stop in Louisville, KY at KFC Yum! Center on Friday, March 27th.