The Final Campaign With: Slayer 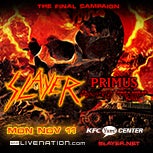 Slayer will set off on The Final Campaign, the seventh and final leg of its farewell world tour. This last hurrah will start at the ExploreAsheville Arena in Asheville, NC, and make a stop at the KFC Yum! Center on Monday, November 11, 2019.

Accompanying Slayer for this last ride are Primus, Ministry and Philip H.  Anselmo & The Illegals performing a vulgar display of Pantera, who will support on all dates.

Slayer’s Final World Tour began on May 10, 2018, with the band’s intention to play as many places as possible, to make it easy for the fans to see one last Slayer show and say goodbye. By the time the 18-month trek wraps on November 30, the band will have completed seven tour legs plus a series of one-off major summer festivals, performing more than 140 shows in 30-countries and 40 U.S. states.