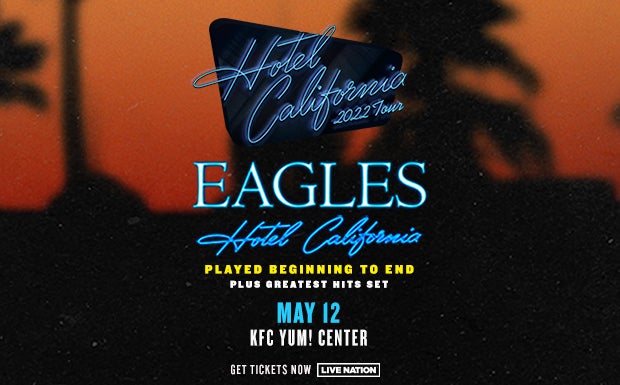 The EAGLES - Don Henley, Joe Walsh and Timothy B. Schmit, with Vince Gill – added a concert on Thursday, May 12, 2022 at the KFC Yum! Center to its “Hotel California” 2022 Tour. The Eagles were the first official concert at the KFC Yum! Center on October 16, 2010 and return as part of the venue's 11-year anniversary celebration.

Each concert will feature the Hotel California album performed live in its entirety from start to finish, accompanied by an orchestra and choir.  After a short intermission the band will perform a set of their greatest hits. All shows will begin at 8 PM EST.

The Eagles kicked off the “Hotel California” concerts in 2019 in Las Vegas to rave reviews and critical acclaim. To date, the Eagles have performed more than 40 Sold-Out shows in 26 major U.S. arenas, including five nights at the famed Madison Square Garden in New York City, four nights at American Airlines Arena in Dallas, and three concerts at the Forum in Los Angeles.

COVID-19 Protocols
At this time, the event organizer for Eagles is not requiring proof of vaccination or a negative COVID-19 test for fans attending the show.