Lil Baby The Back Outside Tour 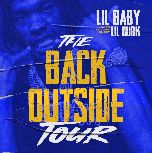 Lil Baby will embark on a nationwide tour with Lil Durk performing hits off their recent collaborative album, The Voice of the Heroes, which debuted at No. 1 on the Billboard 200 chart. Produced by Live Nation, the fall tour will kick off on September 1st and will stop at the KFC Yum! Center in Louisville on Sunday, October 10th!